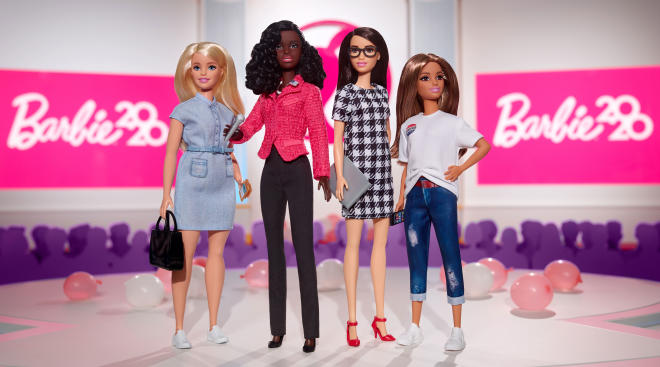 Barbie has been running for office—and showing kids, specifically young girls, that they can and should be in office—since 1992. Now, ahead of the 2020 election, Mattel has launched a new Barbie Campaign Team set, featuring four diverse dolls that each bring unique skills to the table.

The goal of the set is to not only empower young girls, but also to show the next generation of leaders the importance of voting. The set includes the Candidate, a leader who’s committed to driving change. She’s dressed in a chic hot pink blazer and sleek black trousers. The Campaign Manager is all about setting goals and motivating. She sports a black and white print dress and comes with a computer, file folder and cell phone. The Campaign Fundraiser works hard to raise funds for the campaign. She wears a blue denim dress and also comes with a cell phone and information sheets. The Voter, who ensures her voice is heard, is dressed in a white tee, “I voted” sticker and jeans and comes with a cell phone and ballot.

“Since 1959, Barbie has championed girls and encouraged them to be leaders whether in the classroom, community, or someday, of the country,” Lisa McKnight, SVP and Global Head of Barbie & Dolls at Mattel, said in a news release. “With less than a third of elected leaders in the U.S. being women, and Black women being even less represented in these positions, we designed the Barbie Campaign Team with a diverse set of dolls to show all girls they can raise their voices. Our goal is to remove barriers to leadership by giving girls the tools to imagine and play out their future roles.”

Barbie has also teamed up with She Should Run, a nonprofit that supports women considering running for office. According to a survey done by She Should Run, 66 percent of adults saw an increased perception in leadership potential in children who role-play.

She Should Run also receives funds from the Barbie Dream Gap Project, a global initiative that gives girls the resources and support they need to continue believing in themselves.

“With the upcoming elections and the current push for equality and representation, 2020 is an incredible time for us to inspire young women and girls to lead,” Erin Loos Cutraro, founder and CEO of She Should Run said in the release. “Understanding the role we play in empowering our daughters is the first step—we have to have healthy conversations at home and encourage curiosity. By getting them excited today, we’re giving them the confidence to raise their voices and run for office tomorrow.”

Along with the dolls, Barbie is also offering educational resources, including play ballots, printable activities, prompts for girls to write their own campaign speeches and more.