When you’re a kid, becoming a parent seems like a natural stage of progression that can and will happen eventually. Until then, you play make believe and dream up a house full of kids that’s overflowing with a whole lot of love. But the reality is, becoming a parent isn’t always that simple. And for same-sex couples, it means relying on fertility clinics, sperm or egg donors, a surrogate or adoption agencies to make the dream a reality. Put simply, it’s largely out of your hands.

Matthew Eledge and Elliot Dougherty knew they were destined to be dads, but figuring out how they would make it happen was the hard part. “It was intimidating to admit that we wanted a family, because we knew we would have to rely completely on others to make that dream come true,” Dougherty tells The Bump. “Allowing others to help you is so vulnerable, and isn’t easy to do, but it encourages you to recognize the immense love and support that surrounds you.”

With the help of Matthew’s 61-year-old mother, Cecile, as a surrogate, and Dougherty’s sister, Lea Yribe, who donated her eggs, the couples’ happily ever after came when their daughter Uma Louise was born in March. If not for the couples’ passion to be fathers, Cecile’s longing to see her son happy, and Yribe’s selfless act of giving, Little Uma would still be but a dream. “I hope that anyone who hears our story can celebrate its uniqueness: A mother’s love for her son and special connection to her granddaughter, and a sister’s love for her brother and her special connection to her niece,” says Dougherty.

Their powerful love story made headlines back in March, and since then, Mathew and Elliot have been learning how to navigate fatherhood all while remaining in the spotlight. “Our only experience as new parents is with camera crews in our home, Skyping in to morning shows and doing photo shoots for magazines. Living in a smaller community and being gay dads, we knew that we would garner more attention than the average couple—both in a celebratory way and from the dissaproving stares of strangers,” Dougherty admits. “But honestly, this experience has been astoundingly positive…People are so loving and joyful. And—only with a good sense of humor—finding ourselves in the comment sections of articles and news stories is always an interesting endeavor.” 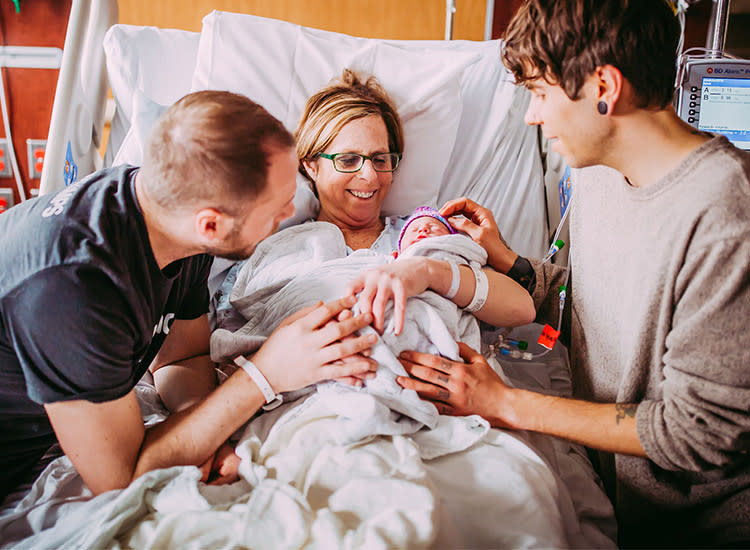 The family is even the focus of a couple of upcoming projects from Upstream Pictures that’ll take a look at the making of their unique family. The projects are currently under development, but we can expect to see more of Eledge, Dougherty, Uma and whole gang in a new docuseries titled Making Modern Families, as well as a scripted dramedy Maybe Baby, according to Upstream Pictures’ website. The docuseries promises to give a glimpse into the lives of individuals from diverse backgrounds as they try to become parents and build a family that works for them. Eledge and Dougherty will be one of many couples featured, and we’ll see how their story unfolds as new dads, as well as the setbacks they face as they look to continue growing their family.

That’s not the only place they’ll find themselves in the limelight. Maybe Baby is a scripted dramedy based on their daughter’s celebrated birth story. The website describes it as a story of “love, perseverance, thinking outside the box and the miracle of having a child—all while fearlessly facing homophobia, genetic misconceptions and ongoing public scrutiny.”

To say they’ve had their hands’ full would be an understatement. But if you ask them, it’s all been worth it. “As you can imagine, having a baby has been both rewarding and exhausting, and this additional attention has only heightened both of those feelings,” Eledge explains. “We’re so thrilled to share our story with people, and it feels great to be received with so much love and enthusiasm.”